National Surveyors Week, what’s it all about?

We’ve all heard about National Surveyors Week – the weeklong celebration of the surveying profession that takes place annually in March. But who’s actually celebrating, and how? What is the best way to use this event to the advantage of our profession?

Consider the main three goals of the program;


The education of the public, both adult and youth, is probably the number one goal of National Surveyors Week.  The work we perform for the benefit of the public often goes unrecognized and we need to share our knowledge with them.  The work being done by our Trig-star volunteers is incredible and should be highlighted during National Surveyors Week.  There are volunteers doing outreach to Boy Scout and Girl Scout groups and resources are available for these programs. We can expand on this and offer to speak to the local Rotary or Lions Club. They are always willing to have a speaker at their meetings. How better to promote your profession and your business than to make a public appearance?

Reaching out to the public through the media and making them aware of our profession and our role in today’s society is a goal whose value we all recognize.  Over the last few years we have achieved this in a variety of ways including Presidential, gubernatorial, and municipal proclamations, newspaper articles, and radio spots highlighting National Surveyors Week.  There is a National Surveyors Week Facebook page and a National Surveyors Week Twitter account. Each of these channels represents another way for the land surveying community to stay connected with a different section of the public.

Although the annual effort of contacting the President, members of Congress, your governor and your municipal leaders may seem trivial, remember that it serves to remind them that surveyors are important.  It is an essential part of our awareness campaign and serves as an introduction to our senators and representatives when we visit them on the hill.  Whenever a bill, law or ordinance is being contemplated which affects the public and impacts on our profession, these elected officials should know who to turn to for answers to their questions.

Newspaper articles, radio advertisements, and on line media can serve the same function for our profession, keeping us in the public eye.  Rather than being hidden behind an attorney, title agent or real estate agent, we can use the media to highlight the value of our profession with our most important constituency our clients.  The best way to get an article about surveying published in a newspaper is to contact a local reporter and let them know that you have a good lead on a community interest story. If that fails to attract their attention offer to write one yourself and submit it to the paper.  State societies, society chapters and even private firms have written or sponsored articles or public service announcements which serve as advertising for our profession and their businesses.

In his inaugural address on January 20, 1961, President John F. Kennedy poignantly said “Ask not what your country can do for you—ask what you can do for your country”. It is with this attitude in mind that we should attempt to give back to our nation and our profession and lay the groundwork for the future.  We can lament the passing of the geodetic field parties of the past and the disappearance of the NGS monuments, or we can embrace the future, share our expertise and volunteer for a common cause.  In doing this we can prepare the foundation which future surveyors and the public will turn to for their geodetic positioning. It will help us hone our skills and keep us current  on changes in our own practice.
Posted by NSPS at 10:57 AM No comments:

To apply, please go to the link below and fill out the application form and all of its required fields. Please remember, to submit all additional documents to fig.ysn.funds@gmail.com on or before the DEADLINE OF 27 JANUARY 2018. Failure to do so will result in your application not being considered.

As a reminder, all previous FIG Foundation Grant recipients are NOT eligible to apply.

https://docs.google.com/forms/d/1GowWEskF-4H5bOaaY3uo_kPGre52FwJGYxy4zhE6KCg
Posted by NSPS at 7:01 AM No comments:

Has there ever been any discussion about having the Title Company certify its report to the Surveyor? It is obvious, at least to me, that if a Surveyor certifies a survey to a title company, it ends up paying a claim because it insured an erroneous condition depicted on the survey, and the title company would
have a claim. The certification, it seems to me, is merely a statement that the Surveyor provides "preacknowledging" its liability to the Title Company if an error on the survey causes a loss to the title company.
Given that, isn't the reciprocal situation a perfect analogy? What if a Surveyor misses an easement because it was not disclosed in the title report? What if that omission turns into a claim, and worse, a judgment against the Surveyor? Doesn't the title company have a responsibility to the Surveyor? I expect they will say NO, but it does not make sense. Shouldn't the title company "pre-acknowledge" its responsibility to the Surveyor?
Our company conducted an ALTA/NSPS survey a number of years ago where it appeared to me that the deed did not convey the land that everyone thought (and said they knew) was included in the pending transfer. The intention was to include all of the land, but there was an exception paragraph that made it at least muddy and, to my reading, actually excluded a significant portion of the property. I called the title company and was told, somewhat summarily, that I was wrong and that I should proceed with surveying what everyone thought should be included. When I asked for that to be put in writing, my request was refused. I, of course, noted my concern on the map and the deal closed. This is not exactly on point, but it shows that the a title company can be dictatorial in its approach.

Anyway, it seems to me that Surveyors should have the same comfort level about how they may rely on the title report, as the title company has on the survey.

Response:
Interesting premise, but I'm afraid it doesn't work for several reasons.
First, a title commitment is not a statement as to the condition of title. In other words, it is not an abstract of title. It is merely an offer to provide insurance under certain conditions, and subject to certain exceptions. Title companies routinely insure over certain conditions that they might prefer to keep as exceptions because of pressure from lenders and market pressures. That may have been the source of their response to your request.
Secondly, the title company's client is the lender and/or buyer, and they are providing insurance, not guaranteeing the status of the title or even of the contents of the commitment. They don't certify their commitment/policy to the lender or buyer; it is simply an insurance contract.
Surveyors are expected to, and entitled to, rely on the title commitment per the ALTA/NSPS Standards. Title companies know that.
If the title company misses something or insures over it, that is their problem, with only one exception. I understand that there are perhaps a couple of states that require Surveyors to do their own easement research. Those states have chosen to burden their Surveyors with responsibility for easements regardless of what the title company provides. So “woe to the Surveyor” who relies on the title commitment for their easement information because, as stated above, the title company may have purposely not included all easements in the commitment.
I love the thought that went into your note, though!
Posted by NSPS at 7:20 AM No comments:


The NSPS Young Surveyors Network announces the Second Annual Student Resume Contest. The winner of the contest will receive an all-expenses-paid trip to the 2018 NSPS Spring Meeting, February 20-22, 2018 in Las Vegas, Nevada.

Last year we had eight resumes, and this year we're hoping for more. We need your help to get the word out to the students in the surveying and geomatics curriculum.
Posted by NSPS at 9:10 AM No comments:

The Small Business Administration (SBA) has endorsed the NSPS campaign for repeal of AAM 212, the controversial Obama Administration policy that defined members of survey crews as “laborers and mechanics” under the Davis-Bacon Act. After hearing from numerous surveyors during town hall meetings across the nation, the SBA Office of Chief Counsel for Advocacy sent a letter to the Secretary of Labor recommending several changes in regulations, including repeal of AAM 212.  For complete information in the issue, visit a special section of the NSPS website.
Posted by NSPS at 12:31 PM No comments: 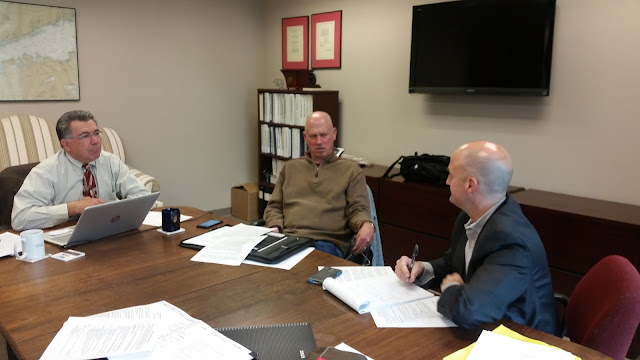 The news about the tremendous flooding and wind damage in Texas is virtually 24 hours a day. President Trump has declared Texas a “Disaster Area” and as I write this, has just declared Louisiana a “Disaster Area”. The torrential rains, already over 30” in many areas, with another 20” predicted, will not be over for several more days.

Many surveyors, their employees and their families will be the victims of this flooding! These surveyors will lose most of their furniture, appliances and clothing and their offices to the flood waters. Some will not be located in a FEMA designated flood zone and will have no flood insurance! Others will have flood insurance on the buildings but no contents!

I can tell you personally that being a flood victim is a devastating experience! I was wiped out in Super Storm Sandy. The effects of that flooding are still with me and the communities hit by that storm. There are still many abandoned homes and businesses four years after Sandy!

My point is that Your Foundation needs donations! We need money to replenish our Disaster Relief Fund and satisfy the claims that will be arriving from Texas and Louisiana! Our Disaster Relief fund is there to help our fellow professionals (THAT MEANS YOU) recover from floods, storms, tornados, fires and any other natural or manmade disaster. You never know when you are going to need help. I sure didn’t!

Please be as generous as possible with your donations. I know that times are still difficult in some areas but send whatever you can afford. We will gratefully accept any donation you can make!

Send your donations to headquarters:

Please mark Disaster Relief on your checks and remember we are a tax deductible 501 c3 organization.

or make your donation online!

Remember that the next check we send could be to one of your members!

Thank you for your anticipated generosity!